Day 37 (31st Dec) – To El Chalten
We said our goodbyes to El Calafete and headed northwards to El Chalten which was about 140 miles away.  The road was nicely paved all the way, with stunning scenery everywhere.  We made good time and arrived in the early afternoon. The Patagonian winds aided progress initially as we headed east, with a tailwind blowing us up all the hills in top gear. When we picked up Ruta 41, taking us west to El Chalten, we were again riding directly into the headwind which, at the worst, forced us down into third gear even on some sections of the level road as well as the hills – it will be interesting to work out our petrol consumption in due course. Our Hostel was very near to a number of hiking trails around the Fitz Roy mountain range, and not far from the town centre.  The town itself is quite small and relatively new having been built in 1985.  It mainly shuts down over the winter as it generally caters for tourists who go there for the hiking, trekking and climbing.
Days 38 & 39  (1st & 2nd January) – Happy New Year
Today we walked a couple of short trails, including one known as ‘Chorillos de Salta’, to take in some of the beautiful views of the river basin and mountains which surround the town. The trails were several kilometres long and led to a spectacular waterfall, with the round trip taking a couple of hours. 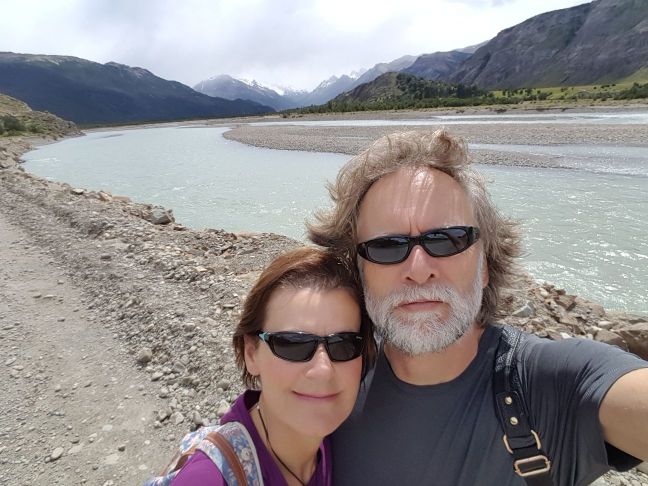 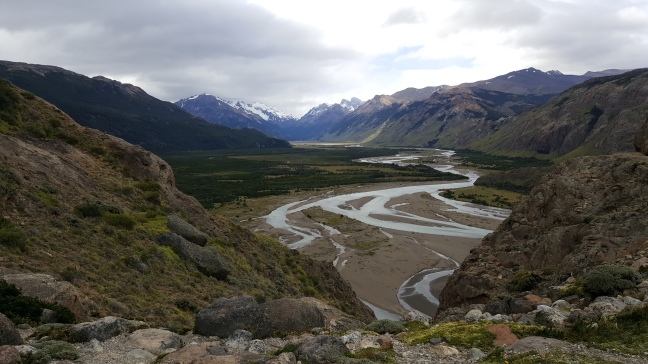 Later in the afternoon Mark spotted a huge yellow campervan with a UK registration plate opposite our hostel, so he went to see if they had driven the 80km unmade part of Ruta 40 which we will possibly be doing in a few days’ time. However, this will depend on the weather as it can become treacherous after rain due to the gravel turning into a muddy quagmire in addition to the numerous pot holes which are there in any weather condition. The driver, an Australian, had travelled this road recently in dry conditions and thought the sidecar should have no problem. But, he advised not to attempt it if raining. We will have to make this decision nearer the time and if raining, will probably sit it out in the small town (Tres Lagos) which is directly south of the gravel section. Alternatively, we would have to back-track and take a different route around the gravel which would add at least 600 miles which we don’t want to do since we have had too many diversions already!
We decided to stay another night in El Chalten so that we could hire mountain bikes and ride from Lago de Desierto (a large glacial lake to the north of the town) back to El Chalten. To do this, we were picked up early by the bike hire company and dropped off at the start, some 37km away. The ride back was entirely on gravel tracks with many hills and many sections of gravel inset with small rocks.  Even with the very bumpy road we thoroughly enjoyed ourselves and clocked up over 40km including a couple of diversions we made to get a bird’s eye view of the lake. 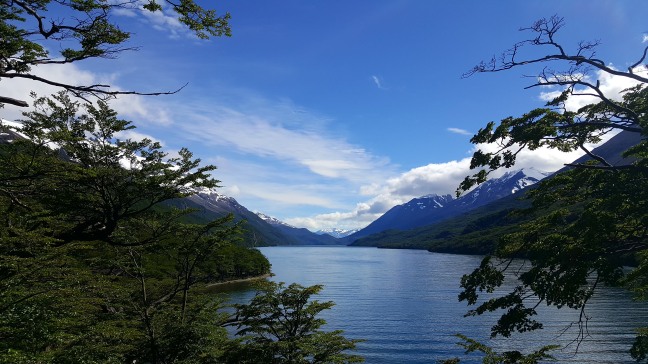 The scenery was spectacular with snow capped mountains one side and multi – coloured granite hills on the other. We saw several waterfalls and rapids and were tempted to hire kayaks, but this must wait for another day.

In the morning we are heading north on Ruta 40, for Tres Lagos, and so far the weather forecast is good.
Whilst in Argentina we’ve noticed that every other car seems to be a Duster, the SUV vehicle made by Renault.   We have a Duster ourselves but in the UK it’s branded as a Dacia (a Romanian car maker owned by Renault).  Here, they’re branded as Renaults and interestingly to us, there’s a pick-up version as well as the standard SUV model.  The Duster is a fairly basic, inexpensive but robust, no-frills vehicle which, like ours, comes with a 4WD option and is Renault’s best-selling vehicle world-wide. In India, there’s an upmarket version branded as a Nissan (who are associated with Renault)

We arrived at the small town of Tres Lagos which was our original destination,  but as it was only midday we continued on Ruta 40.  The road was as we expected with a gravel section of some 50 miles which was affected by numerous ruts and thick soil at the sides which would quickly turn to mud when raining.   It took us over 2 hours to complete this 50 mile section and was an experience we won’t forget.

We eventually arrived at Gobernador Gregores, the first sizeable town, after a ride of some 200 miles and rode around for a while looking for a place to stay.  Whilst waiting at a set of traffic lights, two friendly locals in a pick-up truck started chatting about the bike and asked if we were looking for somewhere to stay as one of them had a room.  This could have been a mistake but our gut instinct said go, so we followed them back.  The room, in a small annexe, was fairly basic but fine for a night and we felt more at ease when introduced to family and friends who were constantly popping into what seemed to be an open house and soon there were six people sitting at the table preparing supper for us all!   The meal was accompanied by wine and as the evening progressed homemade cherry brandy appeared along with an old wind-up gramophone record player with Argentinian Tango music put on it….an unforgettable evening!

We said our goodbyes in the morning and headed onwards towards our next stop, Perito Moreno, some 200 miles away.  En-route, we stopped at an isolated hotel, Las Horquetas, for a coffee, this being the first building we had seen in over 75 miles.  When returning to the bike, Mark noticed that 2 bolts holding on the sidecar sub-frame to the bike were missing.  This was a problem as the sub-frame had become loose and we were reluctant to ride the bike in this condition.  Luckily, Mark had some spare bolts and between him and two helpful people from the café, they managed to get one bolt in to temporarily secure the sub-frame in place.  The second bolt had sheared-off completely leaving a remnant in place which needed to be drilled-out before a replacement could be fitted.

This meant we had to find a garage, the nearest one being back at the beginning of the 75 miles we had just ridden!  Feeling a bit despondent, we rode back to Gregores to look for a garage.  After searching in vain, we decided to return to the house where we had stayed the night before since one of the owner’s friends, who we’d met the previous night, happened to be a mechanic.  They were somewhat surprised to see us again but turned out to be extremely helpful.  We booked-in again for the night and the bike was repaired that evening….the sheared bolt was drilled out and two new bolts were installed.  We were also introduced to our first taste of Mate, a traditional South American caffeine-rich infused drink which is drunk by almost all Argentinians.  It’s traditionally shared by friends with all drinking from the same cup using a shared straw.

Another very sociable evening meal followed with about ten people around the table and once finished a Karaoke machine appeared complete with disco lights and plenty of wine.  We didn’t get to bed until well past 2.00am and had a most bizarre evening, with both of us taking our turn at the microphone.

Day 42 (5th January) – Perito Moreno
Up not so early after our late night, we headed for Perito Moreno for the second time.  It was a lovely sunny day but the wind continued to blow strongly, causing the bike to weave across the road at times.  However, there were so few vehicles around that it seemed safer to ride in the middle of the road to minimise the risk of being blown off and into the gravel verge, which was at times steep and rock-strewn.   The road surface, however, was good and the magnificent scenery continued all along.  The barren, now-rocky landscape was changing from sandstone to pink and remained a vast open space with groups of Guanaco roaming here and there.  There were also occasional Rhea and a few skunks too albeit these were unfortunately wholly road kill.  But, the most amazing sight of all were thousands of Cicadas covering the road over the course of several miles.

We eventually arrived at Perito Mereno and, thanks to our ‘ i- overlander’ app, we found a nice hotel in a convenient location for the night.