After finding that neither the hot nor cold water worked in the morning, we headed off from our rather dire *’Hotel Paradiso’ in Esperanza towards El Calafate which is some 200km to the northwest, at the foot of the Argentinian Andes.  It’s a town well-known as being a base for hiking, trekking, kayaking and so on, and is on the backpackers well-worn trail.  Again, the weather was fine – blue skies dotted with brilliant white, rolling clouds over the vast Patagonian Steppe landscape.  Being outside on a motorcycle, our views of the enormous skies were 180 degrees in all directions – no obstructions to get in the way as would be the case with almost any other vehicle. 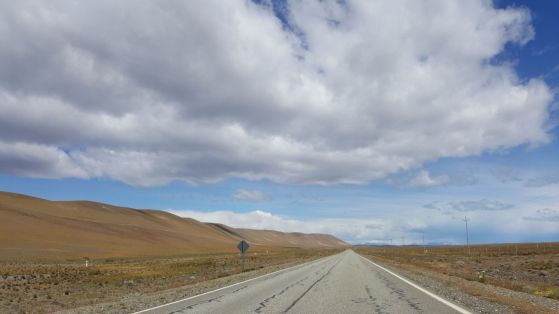 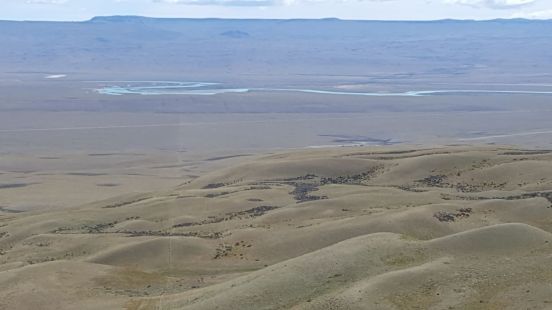 As we progressed towards El Calafate, the infamous Patagonian winds picked up tremendously, with us riding into a headwind for much of the way.  This notably affected progress of the bike which would lose momentum when tackling many of the steeper inclines we encountered (and even some of the less steep ones).  Consequently, we had to change down from top to fourth gear, and even to third on some occasions.  But, the relatively modest 750cc, 60hp motor is, of course, propelling considerably more weight than it was as a solo machine, plus the aerodynamics are far less efficient with the sidecar fitted.  Generally, with ‘normal’ wind conditions, we cruise along at around 55-60mph, occasionally going up to 70mph where there’s a good road and no interesting landscapes to slow down for.  However, I (Mark) have enjoyed the Patagonian winds so far – it’s exhilarating riding in these conditions, complete with intermittent aromas of wild lupins and other road-side plants we’ve recently come across.  Being stuck in a car, maybe with the air-conditioning turned on, would never give the same feeling of being near to nature and the elements.

*The Rick Mayall/Adrian Edmondson film where they ran a hotel….very badly!

Our accommodation for the next 2 nights in El Calafate was a complete contrast to the last place – modern, clean and fully equipped, and amazingly at only very slightly more cost. 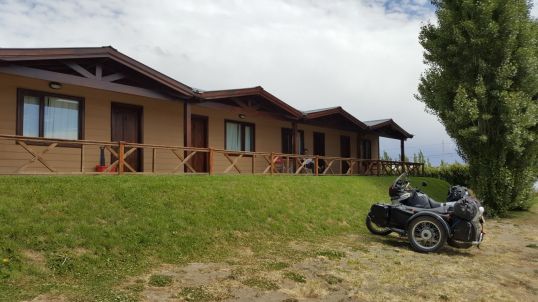 Today (29th Dec.), we took a bus to visit the famous Perito Moreno glacier, 50km to the west of El Calafate, at the base of the Andes.  We decided to take the bus, rather than the bike, so that we could leave the bike gear at home, snooze on the bus, and look at the landscape with 100% concentration since I (Mark) am constantly looking at the road ahead for potholes, stray farm animals, dogs and more lately ostriches, as well as appreciating the landscapes.  It was interesting to note the variety of other people on the coach, ranging from budget-conscious backpackers to older tourists complete with expensive cameras and massive telescopic lenses. 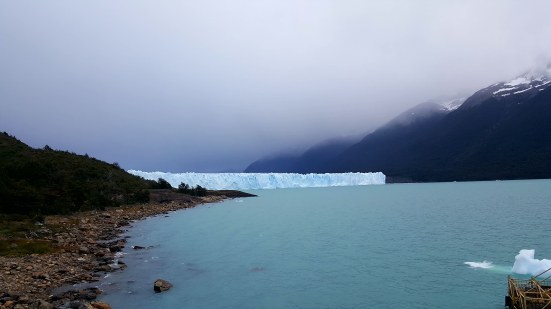 Our bus dropped us off at the reception centre in the ‘Los Glaciares’ National Park in which there are a number of glaciers, Perito Moreno being the largest of these.  We first saw the glacier as we approached it from the bus, and it looked impressive.  Once we disembarked and took the trail leading towards it, it came into full view at close quarters and was jaw-droppingly magnificent.  From the last ice-age, it is around 5km wide where wedged into the mountain valley; around 31km long to the border with Chile; and some 700m deep at its centre.  The lower end terminates in an ice cliff of between 50m and 60m high, with large slabs of the ice cliff constantly breaking away and falling into the glacial lake below, each time accompanied by a thunderous explosion as the ice plunges into the near-freezing water. 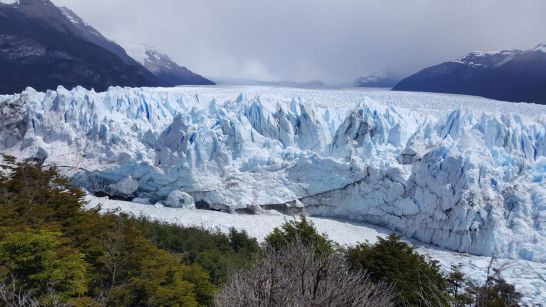 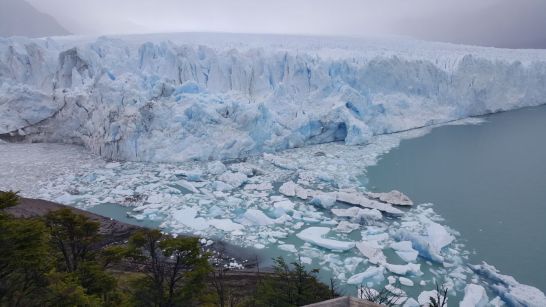 Whilst there, we had 4 seasons within a few hours – warm sunshine, strong winds, dark cloud as far as the eye could see, and driving freezing rain.  If we could be guaranteed warm sunshine, we could have sat there watching the ice falls for days or weeks.  We also saw a very cool 4×4 camper van from Austria: 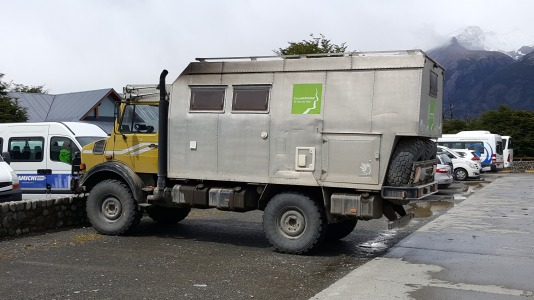 Jason at Birkby Construction, if you’re reading this….none (and I mean absolutely none) of the buildings in Argentina which we’ve seen so far have any gutters or downpipes.  The roof coverings (which are all of corrugated sheet, some of which is pressed into a ’tile’ pattern) all just discharge the rain direct onto the ground.  So no overhauling of knackered old cast iron components needed here!  And in Chile most of the houses seem to be built using 3″ x 2″ timber frames clad with OSB/corrugated sheet outside and some sort of board inside, making them around 5″ thick overall, even in the deep south where the weather is cold and wet.  The concept of cavity wall construction I suspect is rare if not unheard of.

6 thoughts on “17: To El Calafate and the Perito Moreno Glacier”