Day 95 (27th Feb.) San Pedro de Atacama to Susques – crossing the Andes
Our first stop after leaving Casa Campestre was to the Aduana (Customs) in the town, to confirm that all paperwork for the crossing into Argentina can now be done at the border as until recently this had to be done here at San Pedro de Atacama, some 100 miles short of the border. This was correct, so we headed for the border crossing, Paso de Jama. We rode through more utterly amazing scenery, including snow-capped mountains and volcanoes, and experienced freezing temperatures at over 15,000 feet, which we weren’t used to having as we’d been basking in sunshine for the last few months! We both felt fine at this altitude but made sure we had regular stops for water and the Coca sweets.
We cleared passport control, customs and immigration very quickly and, unlike our border crossing into Chile several weeks ago, didn’t have to put all our luggage through the x-ray machine. We obtained our TIP (Temporary Import Permit) for the bike and then after filling up with fuel, and Lomitos (steak and salad rolls) for us, we aimed for Susques, approximately 80 miles away.
The hotel we chose to stay in was on the main road into the town and had secure parking and comfortable rooms. We enjoyed good steaks for supper along with a bottle of local red wine. It was only when we had finished the bottle that we remembered that we shouldn’t have drunk any alcohol as we would be travelling at high altitudes again the next day. But by then it was too late!

Day 96 (28th Feb.) Susques to Purmamarca – crossing the Andes
We had an early start and headed east on Ruta 52, our planned destination being Salta, the regional capital. The infamous Ruta 40 was another alternative, but remains unpaved in this part of Argentine so would therefore be slow and potentially uncomfortable. Again, the scenery was spectacular – we remained at high altitude for many miles, only starting to decend a little towards the end of the day. An added bonus for us was stopping at the Salinas Grandes (large salt flats) in the late morning. These cover an area of some 30 kilometres long and are an amazing sight to see, especially with the sun glistening on them, and they could easily be mistaken for snow from a distance. We pulled over by several stalls where locals were carving animals and other ornaments out of the salt to sell to passers-by. 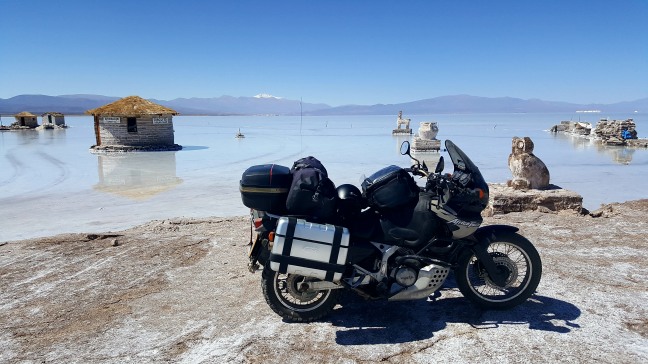 The whole area was very tranquil and our stop made up for not being able to get to the Bolivian salt flats at Uyuni, which we’d thought maybe far busier with tourists on the multitude of organised tours which go there every day.
As we rode off, we could see the reflection of the mountains on the surface of the salt where it was covered with a thin layer of water; it looked magical.
Once on our way, we saw many more Llamas grazing in the scrub, along with herds of donkeys roaming the sparse grasslands and often in the road, too. So, as we rode along, Mark not only had to concentrate on not only avoiding the potholes but the animals as well.

Soon we were again riding the isolated winding roads through the mountains, when I heard a strange noise coming from the sidecar wheel. Our worst thoughts were confirmed…we’d had a puncture!
We pulled over onto the (fortunately) wide gravel verge where Mark proceeded to take off the sidecar’s wheel.

Strangely, when checking the tyre for foreign objects such as screws, nails etc., we found none. After taking the inner tube out we found no obvious defects, so we partially inflated it to see where the failure was. What we found was a tiny split where the manufacturer had imprinted a small ‘O’ shape into the rubber.

Luckily, we had a spare inner tube which Mark proceeded to fit with my assistance. Three passing motorcycle riders stopped to see if we needed any assistance which we kindly declined as we were coping well. A fourth, local motorcyclist pulled over and we assumed he was going to ask if we needed any help, but he’d only stopped as he needed fuel – he must have seen our 10 litre jerry can fitted to the sidecar. We ended up having to delay what we were doing and help him out. We thought afterwards that he should’ve known where the local fuel stations were and wondered if he was out to get free fuel. After giving him several litres of petrol, he looked like he was going to give us some money (which we would have declined). However, he didn’t offer any but gave us Coca leaves in payment!

When we re-inflated the tyre, we noticed that it was bulging out slightly where set into the wheel rim. When Mark had first removed the tyre, one of the tyre levers had slightly nicked the edge of the tyre bead and this is what we suspected was causing the bulge.

Mark decided that, as a precaution, it could be sensible to replace the tyre since the bulge may possibly worsen and ultimately cause the tyre to fail. However, we first had to get to a tyre shop so set off with caution.

The puncture had delayed us by a few hours. Once we reached Purmamarca, a small town on the way to our intended destination of Salta, we stopped to find a filling station. The town’s set against the exceptional Cerro de Los Colores ( hill of Seven Colours), ranging from brown, terracotta, mauve, pink, green, grey to yellow rocks. Now we were short of fuel ourselves and had hoped that there’d be a petrol station in the town. However, there was no fuel station in the town, the nearest one being some 50 km away, on towards Salta. We decided that it would be best to go in the morning and stay the night here.

We chanced upon a small Hospedaje (a private home with a room for rent) on the outskirts of the town which consisted of a small stone and wood shack complete with shower room and w.c., for the equivalent of £8 each! It was very rustic but charming and much nicer than some of the more expensive hostels we’ve stayed in. After a good meal in a nearby restaurant, we returned for some much-needed sleep after a very long day. 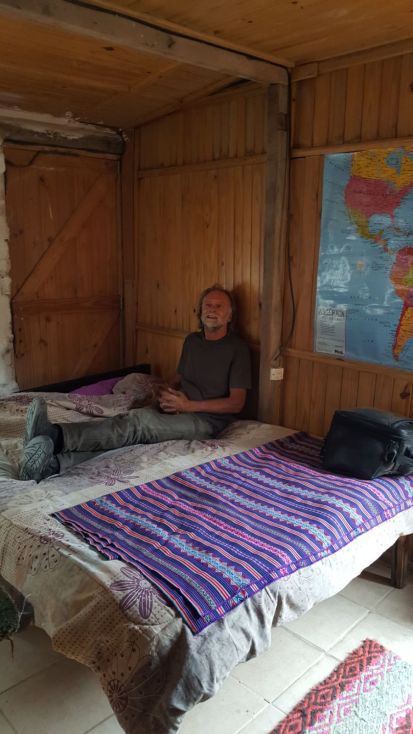 Day 97 (1st March) Purmamarca to Salta
We left Purmamarca and headed for the next town, Jujuy, in search of petrol and a tyre shop.
Once at Jujuy we found a fuel station, but a tyre shop proved much more difficult, so we headed on for Salta. This is a large city, with many preserved colonial buildings around an attractive central plaza, with an outstanding Cathedral, many churches, museums and other places to visit, so we were looking forward to spending a day or two there.
We missed the main turning to the city centre and had to navigate our way through some dilapidated outskirts. However, this proved to be a bonus since we stumbled upon a motorcycle workshop which had a suitably-sized tyre in stock, and a friendly mechanic who fitted it on the spot. After taking the old tyre off, our suspicions were confirmed – the small nick in tyre’s edge bead had caused it to bulge. Having said that, the bulge had actually not worsened over the 150 miles or so we’d covered since the puncture so may well have lasted the trip. But, better safe than sorry. 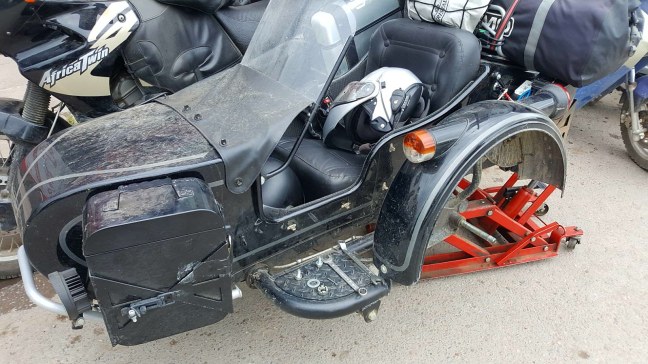 We then found a lovely old hotel fairly near to the central plaza and well within walking distance of the places we planned to visit. Supper was a ‘Parilla’ (or meat grill) – Argentina is famed for its meat, and ours was brought to the table on a hot charcoal grill. We hadn’t had lunch, so really enjoyed this meal and the cold beers that accompanied it.
Day 98 (2nd March) In Salta
Today was spent being tourists. First, we wandered down to the central Plaza 9 de Julio and found the ‘Museo Arqueologico de Alta Montana’. We’d read that there was a mummified child on display and were interested to see it and learn more about the Inca history and their artefacts on display. It was an incredible experience to see a well preserved five-year old child, which was more than 500 years old, and hear the story of how she had been buried high in the Andes mountains, only being discovered some 20 years ago.
We then walked through the city centre to a cable car which took us up the San Bernard Hill, and then walked the 1025 steps back down. 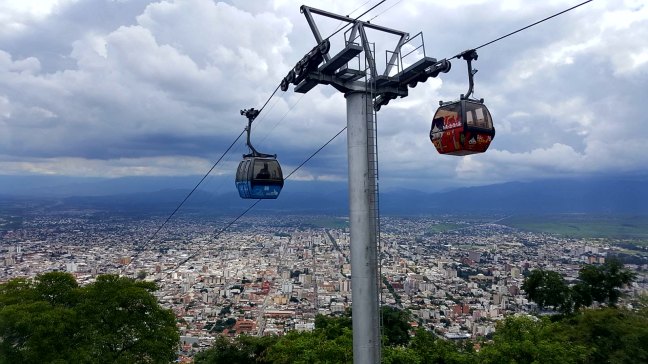 The view over Salta was impressive and we could again see the mountains in the distance which we’d ridden past the day before, and also those we’ll ride past tomorrow when we head for our next planned stop at Cafayate, a town around 150 miles to the south.