Day 110 (14th March) Buenos Aires to Colonia del Sacramento, Uruguay
Our ferry to Uruguay was booked for 12.00, which we thought would give us plenty of time to check-in and just as well as the directions to the port were non-existent until we were practically outside it! Several diversions and no- through roads made it extremely frustrating and we had to pull over several times to check where we were. It was then that a friendly guy driving a Renault Duster pulled over and offered to take us there following him. He had a Harley Davison sticker on the back of his car as well as two ‘Islas Malvinas son Argentinian’ stickers (Falkland Islands are Argentinian) – we wondered if he had seen the GB sticker on the back of our sidecar!

Anyway, we were extremely grateful to him and we considered ourselves lucky that motorcyclists, wherever you are, always seem to go out of their way to be friendly and helpful. Checking-in was also somewhat confusing and after going through passport control for both Argentina and Uruguay, and handing in the bike import permit to the Aduana (Customs), we then had to board the ferry separately. Mark had to stay with the bike and I had to go upstairs to a passenger waiting room and board from there. This was a somewhat anxious situation for me as I had thoughts of something happening to Mark or the bike, with me ending up in Uruguay alone! However, it was all fine and we met-up on the ferry and found a seat by the window for the short one hour crossing over the Rio de la Plata to Colonia del Sacramento in Uruguay.

Once landed, we had to find the Aduana again and get a new bike import permit for Uruguay. We were the only people needing one of these permits. Th Aduana official was extremely friendly and helpful, which is not always the norm. I stayed with the bike whilst Mark took the documents and followed him into the building. When Mark got back it turned out that the customs man had visited the UK last year and had been to Dover Castle and had also seen the famous White Cliffs! For anyone reading this who doesn’t know us, Dover is only about 8 miles from our home in the UK, so quite a co-incidence that he should have spent his holiday there!
We found the place we had booked for the night in Colonia del Sacramento fairly easily, as it was on the outskirts of town. It wasn’t quite what we were expecting as it turned out to be a converted storage container! Despite being a bit cramped, it was fine for one night.

Day 111 (15th March) Colonia del Sacramento to Montevideo
There was a huge electrical storm last night which continued into the early hours of the morning. Today though, it was still cool and windy but luckily the sky was mostly blue, and the forecast was for sun.
We headed into Colonia town centre as it has an UNESCO heritage status – there are old, attractive buildings and cobblestone streets, a legacy left from previous Spanish and Portuguese influence.

After a short tour of the town we headed off towards Montevideo along an extremely straight road edged with attractive palm trees for what seemed like miles. 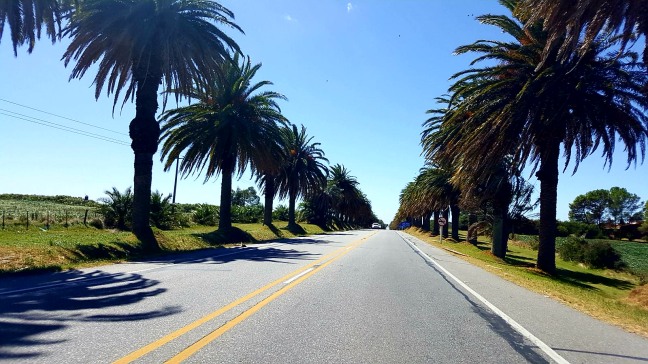 We’re still getting much attention with the sidecar, in particular when we stop at service stations for fuel and food. Today was no different when we chatted to several Brazilian motorcyclists, and within 15 minutes had offers of accommodation, telephone numbers if we needed any help, and suggestions of interesting places to visit and interesting roads to ride.

Our plan is to get to Brazil and then head back to Buenos Aires and home.
Montevideo, the Capital of Uruguay, is its largest city and has many museums and other places of interest, some of which we’ll check-out tomorrow.
I also want to experience a Tango dance evening, so we’re booked into ‘Baar Fun Fun’ this evening. It’s been running since 1895 and serves food, local wine known as ‘Uvita’, and has an atmospheric stage where the performances take place. Mark isn’t quite so excited about it all!
Day 112 (16th March) In Montevideo
Well, we had a fantastic evening last night and enjoyed several Tango dancing displays, as well as a vocalist accompanied by a guitarist who sang local folk songs that everyone in the bar seemed to know all the words to (except us). It was a great atmosphere and we had good food as well. 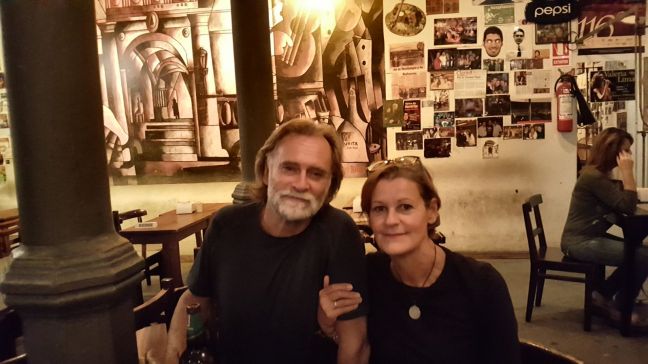 Having had to initially drag Mark to the venue, I had to practically drag him away as he enjoyed the evening so much! I tried the Uvita, which was very similar to sherry.

This morning we visited the Museo Andes 1972, not far from our Hotel. It’s the museum dedicated to the plane crash in the Andes after which some of the passengers survived by two of them trekking over the freezing mountains to raise the alarm, many weeks after rescue searches had been abandoned.

We spent several hours wandering around the displays, watching videos where survivors described their experiences, and chatted to the curator who knows some of the families involved. It was all very interesting and afterwards we walked around the city shops, down to the river and then looked inside the Metropolitan Cathedral which was very ornate and beautiful.

Tomorrow we are moving on to Punta del Este which is a well-known (at least to South Americans), exclusive beach town about 100 miles along the coast, eastwards. Now the holiday high season has ended, we’ll hopefully have no problem finding somewhere to stay. However, first, we’ll look for a new rear tyre for the bike whilst in Montevideo as it’ll be harder to find one when outside the city. It still has some tread left, but realistically only has around 500 miles before replacement will be needed.