Day 116 (20th March) Punta del Este to Punta del Diablo
It took us a little longer than usual to pack up this morning as we found a pool of water in our metal food box, which is secured to the side of the sidecar. It must have got in during the all-day/all-night storm of two days ago, in spite of the robust seal provided around the box’s hinged lid. So, we had to empty it, dry it out and re-pack. My helmet, despite being under the sidecar’s tonneau cover, had also got damp inside. Since I didn’t relish the idea of putting on a wet helmet, I spent a bit of time drying it with my hairdryer!
The ride to Punta del Diablo, once we got going, was very interesting despite being along a straight, flat road. Hundreds of palm trees lined the road and every so often there were great numbers grouped together amongst pampas grasses growing over vast areas of grassland, with sheep and cows grazing.
We reached our destination in the late afternoon and started to look for somewhere to stay. We’d previously looked on booking.com but I hadn’t seen anything suitable. I really wanted to stay in a cabana (cabin) with a sea view, as this area is noted for its extensive, attractive beaches, with waves which are particularly good for surfing. We stumbled upon a small Posada (Roadside Inn) which had several available cabanas with an amazing, uninterrupted view of the Atlantic Ocean. Under the guise of wooden cladding, we very quickly realised they were more storage containers in disguise, but the view made up for their compactness! 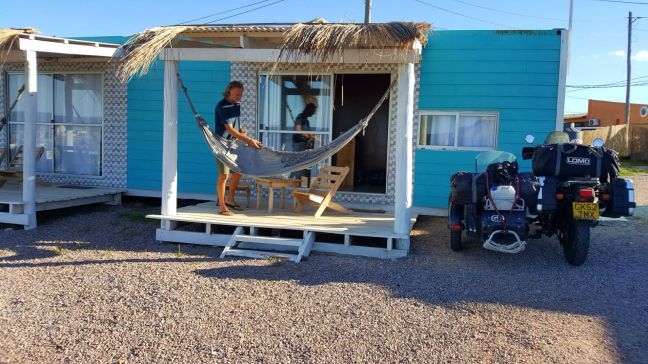 We decided to stay for several days as we had a good decking area complete with hammock, plus a good few days of predicted sunshine.
Day 117 (21st March) In Punta del Diablo
Today was mainly spent sitting on the decking in the sunshine, doing crosswords, and Mark sleeping in the hammock. However, we did venture out to have a walk around the town and along the beach.

Many houses here are thatched, similar to Punta del Este, as there are many areas of marshland along the coast where reeds grow, which are used for roof coverings. Whilst walking around the town, we also saw many interesting and colourful cabanas, hostels and houses on stilts.

In the summer (January and February), apparently this small fishing village of 900 inhabitants swells to 30,000, so we’re pleased to have missed the busy period – the town is relatively peaceful now.
Uruguay has recently legalised the use of Cannabis which can be bought from pharmacies for one’s own use, or one can grow up to 6 plants for personal use, but cannot be sold on to a third party. We noticed ‘special’ brownies being sold on some of the street stalls, which we may well try tomorrow…. as if brownies aren’t pleasurable enough when they are just normal!

Day 118 (22nd March) In Punta del Diablo
Another lovely sunny day was spent lazing around on our decking and on the beach, which is just a minute from our cabana. We watched a fishing boat land its catch, with many people appearing from nowhere to help drag it up the beach and turn the winch.

Then, large polystyrene boxes were filled with the fish and taken to several shacks along the beach road where they were gutted and sold to the general public and local restaurants. We decided to eat in one of the restaurants and chose the fresh fish – we weren’t disappointed. Sadly though, the Brownies weren’t on sale today!
Day 119 (23rd March) In Punta del Diablo
We decided to stay another night as we couldn’t think of anywhere better to be than here in the sunshine!
I woke up early to the sound of a car alarm – the sun was just rising, so I sat on our decking and watched the sun rise up over the sea. 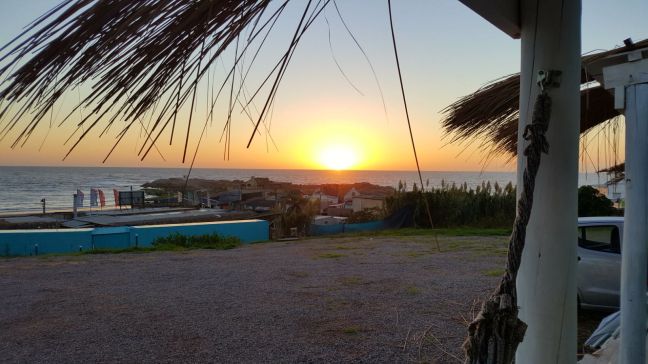 Mark later checked over the bike as we will leave for Brazil tomorrow morning. It is a short ride to the border at Chuy, some 25 miles away.
We spent the day reading and people-watching on the beach. There were several kite surfers close-by who were very skilled at keeping on their boards when it became very windy in the afternoon. It was incredible how high they flew out of the water, and how they managed to miss the dozen or so swimmers close-by in the water!