We left our Cabana in Lican Ray reasonably early and followed a scenic tourist route towards Ruta 5 which leads to Puerto Montt, a large port located to the northern end of the Chilean fjords which run down to the southern-most tip of the country. We rode through extensive forested areas on said tourist route, complete with wonderful views and a number of hairpin bends. We stopped for fuel on Ruta 5 and got talking to Ivan, a very spritely 74 year old biker with a BMW 1200GS. He spoke fluent English (having been born of a French-Canadian mother) and coincidentally lived in Lican Ray – our last stopover – but today was riding to Porto Montt. We exchanged contact details and he very kindly said if we needed any help or a place to stay, should we be back in Lican Ray, we must contact him!
We arrived at Puerto Varas and spent a couple of hours trying to find the Airbnb cabana which we’d booked the previous day, since the owner had provided very poor directions; we’d messaged her the day before with no reply and telephoned many times on the day with no response either, so were unsurprisingly becoming concerned. We headed for a café to use their Wi-Fi, only to find a message from Airbnb saying that she had cancelled the booking one hour before our arrival time! Airbnb support were very helpful and gave us a list of alternative places but by now it was 7pm and we didn’t want to have to book another Airbnb property with all the associated waiting for confirmation etc.  Our waiter at the café was very helpful and mentioned that there were many cabanas and hotels further along the road and that we should have no problem getting somewhere to stay.
As it happened, we found a great Hotel which had rooms with views over Lago Llanquihue, the huge volcanic lake next to Puerto Varas, and including breakfast cost a meagre £38 a day for both of us. Whilst the hotel was a bit tired around the edges is had a faded charm and certainly had incredible value….some of the lakeside Hotels we had seen on Booking.com earlier, when trying to find somewhere after our cancellation, were well over £200! We were relieved to have found something that was probably better than our cancelled booking and celebrated with Pisco Sours and Pizza at a nice Italian Restaurant just down the road.

The next day we walked into the town and found camping gas canisters for our Jetboil stove (these canisters were not allowed on the plane), and then bought lunch from a pop-up Turkish street food van. Whilst sitting eating our tasty Falafel and Carne concoctions, we heard an unusual sound – English voices, and this is where we met 2 adventurous girls, Maresha and Caron, who were travelling around South America together in a pick-up truck. They were from London, and we chatted for a while about our respective routes and other such matters. Like us, they had fairly recently started their trip and are heading roughly in the same direction as us, so hopefully we may meet up again somewhere along the way.

On the way back to our hotel, we visited an extraordinary museum full of quirky artefacts and brilliant paintings by an artist named Pablo Fierro. Apparently, he had been given the building – a former water pumping station – several years ago by the town council when it desperately needed refurbishing so that he could display his work for locals and tourists alike to see. He had now refurbished the building and had added various extensions to make it into a maze of exhibition rooms for his paintings and collection of bizarre artefacts which included a number of old sewing machines, wirelesses, and models of Citroen 2CV’s.  There were thousands of comment cards displayed on the walls, all left by previous visitors, and we added 2 more…. unfortunately, we couldn’t fully understand most of them as all were written in Spanish (and a few in what appeared to be Chinese). 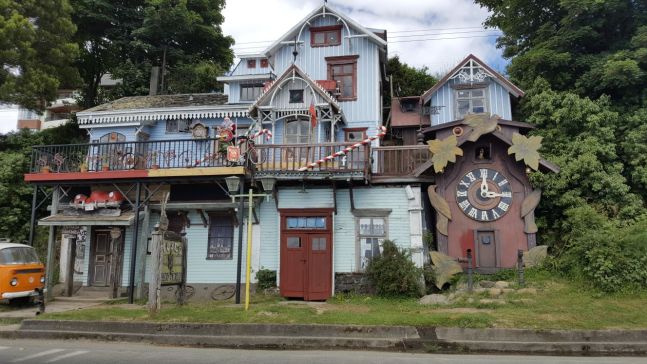 Whilst walking along the seafront, we saw the coolest thing – an old VW camper parked-up, selling books and coffee.  We asked if there were any English books for sale – there was one, entitled ’30 Uses for a Dad’ which was probably not a good idea to get!

We left Puerto Varas earlier today and are now at Puerto Montt, the main sea port some 15 miles south, where we’ll investigate ferries which we must take at the beginning of the Carretera Austral.  The ferries run once a day and entail two voyages with 10 km of land connecting them, taking around 8 hours in total, with all vehicles having to be pre-booked.