We said goodbye to our hosts and set off towards Ruta 5 (the Pan American Highway) heading south.…it was to be a day of coincidences. When we stopped for lunch, at a service station, we started chatting to three Chilean businessmen who were interested in our bike and the trip. Again, they commented that a sidecar was a very rare sight in Chile and by the number of times we have been honked at, waved to, and videoed as vehicles have overtaken us, we are certainly getting noticed! Shortly after, we met an Irish couple who were travelling around South America with their two young daughters. Debbie recognised the wife and it turned out that they had stayed in the same apartment block as us in Santiago the previous week! They told us, amongst other things, how they had had two lucky escapes, first from a deadly Recluse spider and then from an attempted pick-pocketing, but loved Chile as much we do. Hopefully our paths will cross again.
Our next stop was 60 miles down the Ruta 5 at another service station where we bumped into the same businessmen there as before. They welcomed us to what they called ‘their’ services and it transpired that they were area managers for the Shell Services in this part of the country!

We arrived at our destination, Lican Ray, quite late and after a bit of a search found the Cabana we’d hired for the next two days. Unlike cottage rentals in England, there is often no welcome pack (and there wasn’t here), so we dipped into our emergency food supplies as there were no local shops and we didn’t really want to ride the few miles back into the town after a long day’s ride of some 320 miles.

There’s huge lake next to the town of Lican Ray, which we rode to the following morning through picturesque scenery, with Villacarrica Volcano constantly in the background. It’s a huge, active Volcano, with vapours emitting from the top of its volcanic crater. It last erupted in 2015, and as we rode through the town we could see a number of signs for the evacuation route should it erupt again. The lake is beautiful, with an attractive beach front and amazing hills surrounding it. We had lunch at a restaurant overlooking the lake and met a local man at the next table, who had a holiday home overlooking the lake and seemed to know everyone. He kindly arranged for us to join a boat trip round the lake – without charge – which was very unexpected and every enjoyable. It was a shame the commentary was in Spanish, but was an experience we won’t forget. Mark is picking up Spanish quickly and the Spanish we learnt at night school five years ago is slowly coming back – but, the problem is more that the Chileans all speak so quickly! 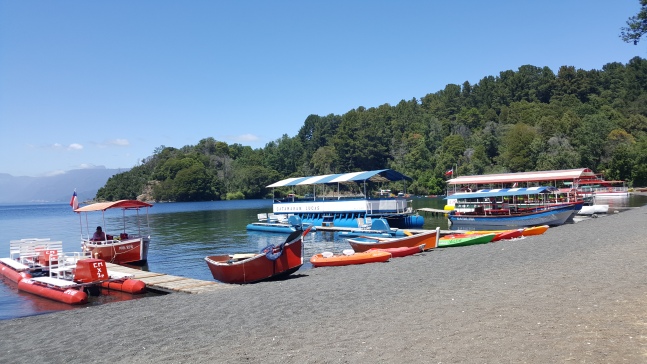