Day 100 (4th March) In Cafayate
Cafayate is a picturesque town with a central plaza which has numerous small artisan shops, restaurants and an impressive church surrounding it. We had an enjoyable stroll around, including one of our usual visits to the town’s church (which is almost always on the plaza) and ended up at El Rancho restaurant for lunch, as recommended by Trip adviser. We had a few very tastey meat empanadas (similar to Cornish pasties) which are much smaller and meatier than those we had in Chile, and a local dish, Locro. This is a hearty stew which is popular in the Andes, and is a national dish of Argentina, Bolivia, Peru and Equador. It consists of corn, beans and potato or pumpkin soup and some type of meat….not exactly sure what meat, but could have been goat!

As we left the restaurant, we chatted to two U.S. bikers who’d stopped at our restaurant for lunch. They were part of a nine-person group travelling in an organised tour over a period of two months. They were waiting for the others to catch up, and when we mentioned that we were travelling with a sidecar they told us us there were not one but two sidecars in their group, which were behind them, but would be along shortly.
They had started their trip in Cartagena, North Columbia, and had then travelled through Equador, Peru and Bolivia before reaching Argentina. The person leading this group through South America was Helge Petersen, who spent ten years travelling the world many years ago, and is now in his seventies. He has written books about his travels and still contributes to many adventure bike publications and organises bike tours through his company, Globe Riders. We spoke to him for a short while, but they still had a fair way to go before stopping for the night, so had to set off again. 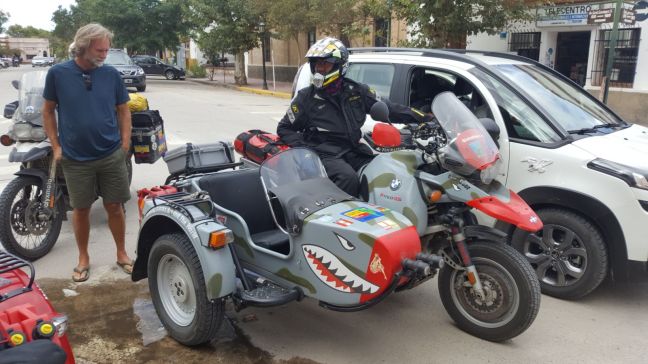 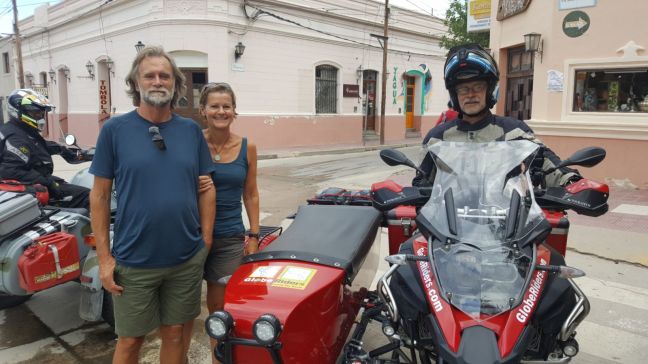 It was interesting to see that the sidecars were like to ours. One of them was exactly the same, a Russian Ural, whereas the other was modelled on the Ural, but had a body constructed from glass fibre rather then steel, and looked slightly longer. Both were fitted to big BMW’s, an older 1150GSA and a more modern 1200 GSA. The only other sidecars we have seen so far were several weeks ago in El Bolson – two were parked-up next to a café and we made a point of chatting to their Argentino owners. Sidecars are a very rare sight in South America, as all the attention we still get highlights!
It was day 100 of our trip today! Time is going too quickly, but we’ll still see much more of Argentina as we now begin to head south-east towards Buenos Aires and Uruguay, before we return home towards the end of April.
Day 101 (5th March) In Cafayate
Today, we had another co-incidence in the town. Mark saw three guys walking along the street, who’d sat at the next table to ours in Salta a few days ago. So we stopped, greeted them, and chatted to them for a while and found out that that they all lived in London. Then, even more co-incidentally, one of them spotted his next-door neighbour from home (Kennington) walking along the street! They’d both known that they were both visiting the general area, but certainly didn’t expect to bump into each other in a back street in Cafayate!
Cafayate is a well-established wine growing region, producing both red and white wines, the most popular being a white called Torrentes. There are also local farms producing goats cheese, and we’ve noticed numerous small stalls and posadas (small cafes with rooms) selling these products along the roadside. So, we were very fortunate to spot a place just on the outskirts of the town that sold both, which we walked to from our Hostel. We’d read that this vineyard had been in production for over 100 years, but several years ago they had noticed a demand in the town for goat meat and cheese, and had therefore decided to rear their own goats on grapeseed oil, corn, barley and oatmeal, and in return they could use the goat droppings to fertilise the soil for the grapes. So, the meat, cheese and wine are all organic.
We enjoyed our walk to the farm, a couple of kilometres along a sandy track through the vineyard. As we’d missed the last tour of the morning, we were able to wander over to the goat pens on our own.

All the goats seemed very well looked-after and friendly.
We bought a goat cheese in the small farm shop and then, on the way back to our hostel, bought a bottle of Torrentes, some bread, tomatoes and avocado for lunch….perfecto!

In the afternoon, Mark checked over the bike – sidecar bolts, engine oil, cooling fluid, tyre pressures etc. since we’re leaving here tomorrow morning and will head towards Cordoba which is en-route to Buenos Aires, which is around 900 miles to the south east, and Uruguay beyond.
We’ve updated our route map which you’ll see below. We’ve also now included a dedicated map page which can be accessed via the menu.