Day 102 (6th March) Cafayate to San Pedro de Guasayan
The weather was overcast this morning as there’d been heavy rain overnight which continued into the early hours. The main road out of town, Ruta 40, had flooded in places and was a bit treacherous where muddy water had been washed down from the hills to the west and over the road, making it slippery. The road is actually designed with a number of wide gulleys running across it so that the muddy water is channelled into the ‘Valley of the Cacti’, on the other side. This meant that small fords had appeared at many of the gulleys, which we of course had to ride through. At one point, we passed several work men clearing the road with a digger. Judging by the amount of soil piled up at the roadside, we imagined that the road could well have been blocked earlier.

We soon turned off Ruta 40 and rode on towards Cordoba along a secondary road, Ruta Provincial 357/307, to Tafi del Vallee, a small town in the middle of the far eastern part of the Andean foothills. The road was paved, but was the worst example of paving we’ve come across so far, and looked about a hundred years old! It had become cracked to such an extent that it resembled crazy paving rather than tarmac, with the bits of tarmac between the cracks being badly eroded as well.

Out of sympathy for the bike, our speed dropped to between 15 and 30mph, depending on how bad the surface was. As we climbed up out of Cactus Valley, the rains returned and the cloud was so low that we were riding right through it, with visibility down to a minimum. We arrived at Tafi del Valley in the early afternoon having covered only 80 miles, and stopped here for a lunch of Locro, a local type of stew.

After lunch, we started to descend into the lowlands which run all the way to the Atlantic coast along Rutas 157, 60 and 9. The road surface was now good and we had to negotiate the never-ending hairpin bends which in any other situation would have been fun, but not today since we were riding through torrential rain (and had to stop for the first time in months to put on our waterproofs). When we eventually finished riding the hairpins, the rain stopped, and the weather started to improve. Whilst the road had improved by now too, there were still the inevitable animals to watch out for and today we had to stop several times for herds of goats, cows and horses which were roaming in the road despite some being managed by horsemen, also known as a Gauchos. 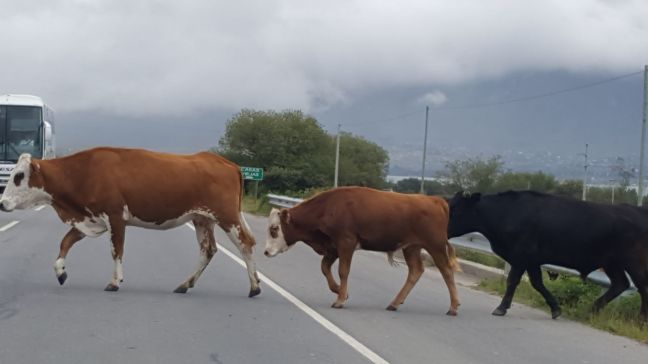 We eventually reached San Pedro Guasayan, where we decided to stay for the night. In fact, we had little choice since the next town where there would be accommodation was fifty miles away. When we saw a sign advertising the hotel in San Pedro, we were expecting to see a run-down hostel since most of the buildings in the small towns we had ridden through were fairly grim, but we were pleasantly surprised! It was a fairly new, sizable hotel with a thermal spa pool outside, which unfortunately we didn’t get to use. It had the feeling inside of being in a university hall of residence, especially in the restaurant, and was more than fine for one night.
Day 103 (7th March) San Pedro de Guasayan to Cordoba
The weather was much improved today and we made good time as the road surface remained good. The landscape was much flatter and the road was straight almost continuously. We rode through several different types of landscapes – first, lush greenery similar to home; then a return to desert-like scenery with sand and cacti; then an expanse of salt flats; and finally more green landscape again very similar to the UK. We’d now entered the vast, low-lying area known as the Pampas.

We stopped at a service station in the late afternoon to use their Wi-Fi, to check-out hostels in Cordoba. After browsing for a while and finding nothing suitable, we decided to take a chance and stop on spec. This turned out to be a bad decision as the city was busy and it was difficult to park on the narrow streets outside prospective places to stay. Anyhow, we eventually found a hostel, with a 24-hour secure parking lot a short distance away.
Day 104 (8th March) In Cordoba
Cordoba is Argentina’s second largest city and in our opinion not the most attractive! We saw a few interesting old Colonial buildings in some of the side streets, and the cathedral fronting the main plaza is spectacular inside, but many of the buildings we found rather mundane.

We walked a mile or so to the central park where we had some tasty street food, and then walked back to a bar on the plaza for a cold beer and people-watched for a while. The national drink in Argentina is Fernet, a strong medicinal-tasting herbal liquor which is always mixed with coke, so we will have to try it and compare it with the Pisco Sours of Chile!

We returned to the Hostel late afternoon as it was too hot to be walking around the city for too long. There was a cool breeze on the roof top terrace and it was from there that we heard the noise of a demonstration outside, very near the hostel. We had heard that it was ‘International Women’s Day’, so we guessed it was something to do with that.
We went to investigate. There was a huge march along a nearby main road, with a variety of banners and the marchers singing and chanting through loud hailers. There were also many trades union banners, and we could hear that they were demanding equal pay for women.

Day 105 (9th March) Cordoba to Leones
We packed-up and left the Hostel by 11.00. Hostel Aldea hadn’t been the best hostel we’d stayed in, but certainly not the worst. Maybe we should avoid ‘back packer’ hostels in the future! All the breakfast had gone by 9.30 yesterday (it finished at 10.00), and despite being told someone had gone for more bread, it never appeared, so we didn’t bother with breakfast this morning.
We exited Cordoba relatively easily albeit the signage was non-existent, and the off-line GPS map wanted to take us around in circles! At many of the road junctions there are no give-way signs or road markings (as in all other towns too), so it seems to be a free-for-all and could be potentially rather dangerous. Anyway, we found the city ring-road that took us to the autoroute for Buenos Aires and headed for the first service station to fill-up the tank and have breakfast.
In Argentina there are many Police check points. We were stopped a few days ago when they checked our passports and documentation, and again today!
The Police Officer today indicated that I wasn’t wearing a seat belt in the sidecar. In fact, we don’t have a seat belt fitted as it is not a legal requirement in the UK. After a discussion with his colleague he let us move on, but it did cross our minds that we may have to pay a fine/bribe, as we’ve heard a lot about such incidents involving the transport police from other travellers we’ve met.
The weather was in the mid-30’s and, unusually, hot even when riding along at speed. Whilst having lunch at a filling station, we decided to pre-book somewhere to stay for the night, preferably with a pool and with a bit more luxury than the last hostel! We found ‘Posada Maestosso’ on booking.com and reserved our room as the hotel had a nice-looking swimming pool and was only a short ride away.
When we checked-in, it was so nice that we decided to stay for 2 nights since the forecast for the next day was stating 36 degrees and we could spend a whole day lazing by the pool…..sorry to those who are reading this from a very cold UK!
We were the only people at the pool when we got there in the late afternoon. We cooled down on sunbeds in the pool, which was surrounded by palm trees, and stayed there until the sun went down.…luxury!

Day 106 (10th March) At Leones
As mentioned above, we’re spending the day at our hotel, catching up with this blog, checking the finances and extending our bike insurance, and taking it easy by the pool!