Day 125 (29th March) Rio Grande to Cacapava do Sul
We picked up our new tyre from Gustavo and once we’d paid, he asked us to wait a minute whilst he went to the back of the shop. When he returned, he had 2 shop logo T-shirts which he gave us, which was very thoughtful of him. We asked if there was somewhere nearby where we could get the tyre fitted, so he phoned a nearby workshop to arrange it for us, which was really helpful.

After saying our goodbyes to Gustavo, we rode off to the workshop which was two blocks away. The mechanic was looking out for us and soon had the bike jacked-up and the rear wheel off. We had to wait in his workshop whilst he took the wheel and tyre to a nearby tyre shop in his van!

Finally, the wheel was back on the bike, and after chatting to the mechanic about his drag racing trophies and looking at some of the bikes in his workshop, we set off northwards towards the next big town, Santa Maria. We rode until around 5pm and then started looking for somewhere to stop for the night.
A motel on the edge of the town of Cacapava do Sul, twenty miles short of Santa Maria, looked fine for us, but being 3 km from the town centre resulted in us having our supper in the garage café next door to the Motel as we didn’t really want to get back on the bike and ride to the town centre in the dark. 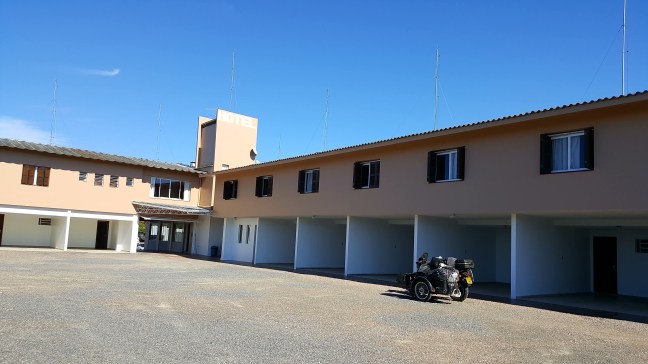 Day 126 (30th March) Cacapava do Sul to Santiago
We had a bit of a disturbed night’s sleep due to noisy revellers outside the motel and also traffic entering and exiting the garage next door, but at least we were up early and ready to leave before most other mornings.
We rode through some very picturesque forests and countryside, reminding us of home, along a mixture of road surfaces with potholes and undulating tarmac to stretches of smooth paved road. We reached the town of Santiago and booked into a hotel we’d seen when doing some on-line research. It’s Good Friday today and we didn’t want to risk having any problems booking a room if we left it too late.
We went to reception to check for vacancies and then to look at the room. Unfortunately, the receptionist had trained at the Fawlty Towers School of Customer Service and was extremely rude! We had limited Portuguese and she had no English, but instead of speaking slowly to us and improvising, she spoke louder, quicker and got visibly cross with us. We were both quite shocked at her manner as this was the very first time since we’ve been away that we’ve met someone who has been less than friendly and helpful. However, it meant that we could talk about her attitude in front of her and she had no idea what we were talking about! A friendly porter could see our problem and tried to make amends by being very helpful and taking some of our gear up to the room, which made amends to some extent.

Whilst the Hotel was again on the edge of town, it had a restaurant next door and we both looked forward to a nice evening meal as we hadn’t eaten since breakfast. We headed out for supper only to find the restaurant closed so we ended up in a nearby garage café again with another sandwich and ice cream! Tomorrow, we will have to try and get it right!

Day 127 (31st March) Santiago to San Tome (Argentina)
We had another disturbed sleep due to a dog barking all night in a neighbouring property. It had been raining most of the night too, and was still raining when we packed up to leave, so it was a day of waterproofs being put on and taken off when the rain stopped.
We headed towards the border crossing to go back into Argentina and made good time arriving there by 2pm. We had our passports stamped for the exit from Brazil, and then were told we needed to get a Carte Verte (Green Card) to get into Argentina. We’d never needed this before and were directed to an office which supplied them, only to find that it was closed. The friendly Federal Policeman who’d stamped our passports said we had to have this document or we couldn’t pass through the border checkpoint, so we were given directions of where to obtain one. This entailed riding 4 miles back into the town on the Brasilian side of the border, Sao Barjo. When we found the address, it was a private house in a residential street. Luckily, the occupant was in and seemed to know all about the Carte Verte, which was a relief to us as it all seemed a bit bizarre!
After answering some questions about how long we were staying in Argentina and handing over 50 Reales, we suddenly realised we had just bought insurance for the rest of our stay (which we didn’t need as we had this already!)  Anyway, he turned out to be a very friendly guy and he confirmed he was in fact a broker and nothing to do with the police and/or customs who has sent us to him!
After getting our passports stamped into Argentina and getting a new import permit for the bike, we rode through the checkpoint and were never asked at any time for the Carte Verte we’d just purchased! Live and learn!
The rain had started again by now and so we made the decision to stop as soon as possible. The first town into Argentina, San Tome, wasn’t too far away but we should have stopped to put on our waterproofs as we ended up getting soaked during the short ride there!
The Hotel – the first we came across – looked a bit grim but we decided to chance it and in fact it was better inside than its outward appearance suggested.

Later, we walked to the town centre but couldn’t find any restaurants which were open, so found a Supermercado and ate our supper in our room….the third night without a nice hot meal!

Day 128 (1st April) San Tome to Montecarlo
In nearly every hotel room we have stayed in, Mark has had to re-tune the TV or correct a plumbing issue. This morning was no different as we didn’t appear to have any hot water despite running the taps for a while. We went to find the concierge who came up to the room and ran the taps again for another five minutes, but by the time the water had become hot it was flowing up from a drainage grate set into the floor tiles, flooding the bathroom floor. He had to go and find a mop and towels to dry the floor, but at least we had hot water now. However, we had the same drain problem later, right after we’d finished our showers!
Breakfast was also like an April Fool’s joke! There was no bread, only a single plain cake and coffee! When we asked for bread – as there was butter and jam on the counter – the grumpy kitchen maid put a few dry crackers on a plate!
Anyway, we packed-up and continued our route towards the Iguazu Falls, which are located to the north-eastern tip of Argentina, at the boundary junction with Brazil and Paraguay. I’ve been looking at places to stay there and hopefully we can find a lodge in the sub-tropical forest, with a little bit of luxury!
The scenery was very lush with forests, huge fields with cattle grazing. 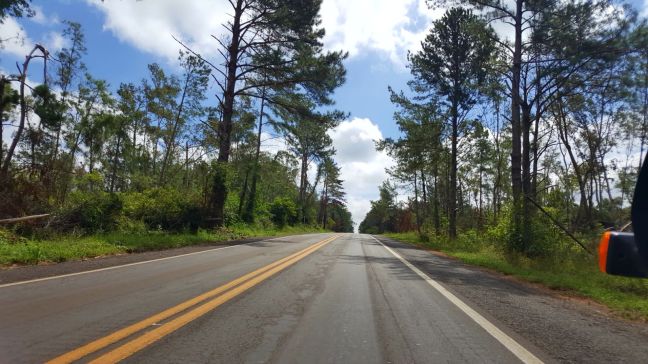 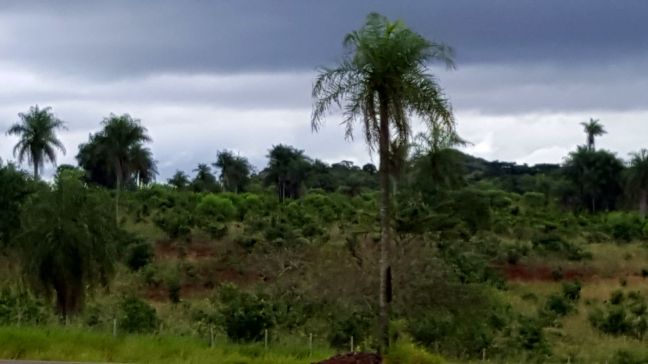 We also drove through an area where there were several Mate plantations.  Mate, a type of caffeine-rich tea, is very popular in South America and many people carry their Mate cups and flasks of hot water around with them wherever they go. They stop at service stations to top-up their flasks with hot water and we’ve seen hot water vending machines outside the services, too. When talking to our neighbour at Punta del Diablo a week or so ago, he told us that even the politicians take their Mate cups and flasks into parliament with them! We have tried it and it is an acquired taste.
Our stop for the night is in the town of Montecarlo. Unfortunately, it has no resemblance to its namesake in the South of France, but hopefully we’ll be able to find somewhere there for supper, other than a garage café!

Day 129 (2nd April) Montecarlo to Puerto Iguazu
Last night we found a restaurant in the town and enjoyed our meal sitting outside in the warm evening. Today, we booked our next hotel at breakfast and we will be staying in a jungle lodge just outside Puerto Iguazu, just 20 minutes from the waterfalls.
The weather first thing this morning very misty but the forecast was good for later on, so we packed-up and headed off for the final stage of our journey to the Iguazu Waterfalls. It was a short, 80 mile ride and as we approached the town we both noticed that the bike’s windscreen fairing was wobbling more than usual and feared the worse – the welding repair we’d had done to its metal support bracket back in San Pedro de Atacama appeared to have failed after some 3000 miles and numerous bumpy roads.  We pulled into a service station where Mark had a closer look and confirmed our thoughts. However, we were able to secure the support bracket with cable ties which held it tightly in place. We now only have to ride 800 miles or so to Buenos Aires to ship the bike back to the U.K., so will probably have the bracket re-welded once we return home rather than try to find another welder here unless it’s absolutely necessary.

Some of the roads we’ve ridden on have been dreadful compared to UK roads, and to think we used to moan about the potholes there! They are nothing compared to those in South America – some drain covers are missing, decent roads suddenly turn into pothole-ridden roads with no warning, and there are also many ‘sleeping policeman’ humps in and out of the towns and at a number of junctions, bends etc. outside of the towns.
We arrived at out hotel in the early afternoon and it’s all I had hoped it would be. Our room has a small balcony from where we can look out into the sub-tropical forest. Everywhere we look we can see butterflies, some as big as bats. After settling-in we went to the pool area, took the last of the sun for the day and had a swim.