Days 136 – 141 In Buenos Aires, before flying home to U.K.
Day 136 (9th April)
Today, we walked to Cementerio de Recoleta, a popular tourist spot several miles from our hotel. Once there, we saw impressive statues and marble mausoleums, set out in grid-like ‘streets’. In all, there are around 4,500 individual mausoleum buildings. At one point, we tagged onto an English-speaking tour and learned that the rich and famous had bought their plots many years ago and that all are now taken, although family members can still be added to the existing crypts. There are steps down within the mausoleums to underground vaults, up to 25 feet below what’s visible at ground level. It was sad to see some had been neglected and had been left to decay, some with ivy growing all over them. Many famous politicians are interred here as well as Eva Peron although we couldn’t find her family plot. 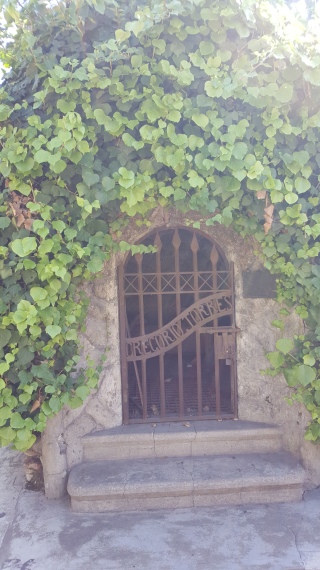 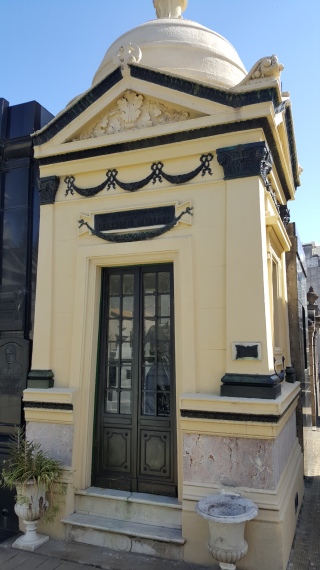 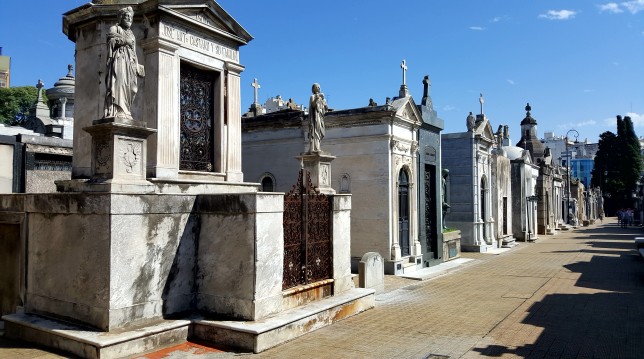 We spent quite a while wandering around in the sunshine, but it became very hot in the sfternoon so we found a cafe to sit outside and had a late lunch before heading back to our hotel.

Day 137 (10th April)
We spent the morning booking our flight home and sorting out some of our stuff, when we realised it was actually a really sunny day outside (the hotel windows are tinted and made it look slightly dull), so we put off finishing the sort-out until later. We went out to find the San Telmo Market which has a huge antique and craft market at the weekend, but during the week just the indoor market part is open. We had a wander along the ‘lanes’ between the stalls and could only really look as limited space in our luggage for returning home. The market locality was very pleasant, with cobbled streets and impressive colonial buildings, and plenty of small grocers and cafes. We enjoyed lunch at a small, traditional café and then explored the area further, ending up at another nice café where we sat outside for a while with lemon tea, people watching. 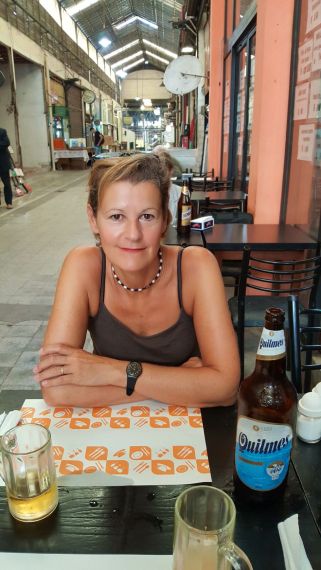 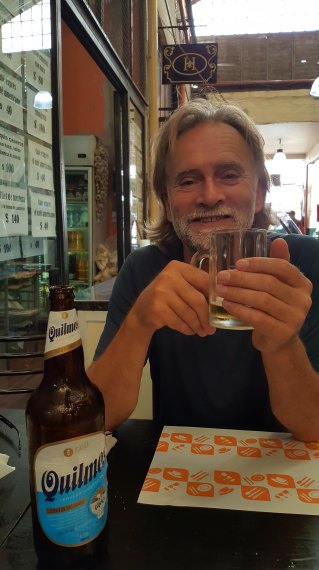 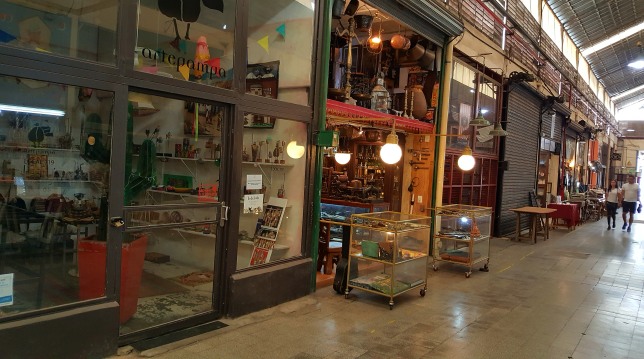 Day 138 (11th April)
Today we visited the Palacio de las Aguas, a beautiful water tower which is faced with over 300,000 tiles, that has now been de-commissioned and converted into museum. It was constructed in 1884 at a time when there was a need for clean water after an outbreak of Yellow Fever. We strolled around the different rooms looking at taps, drainage pipes and a plethora of old lavatory equipment…..some looking remarkably like those in many of the places we have stayed at! 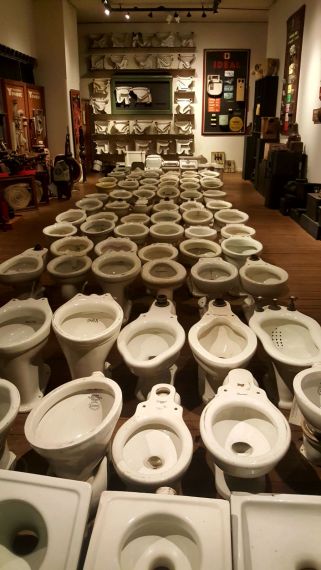 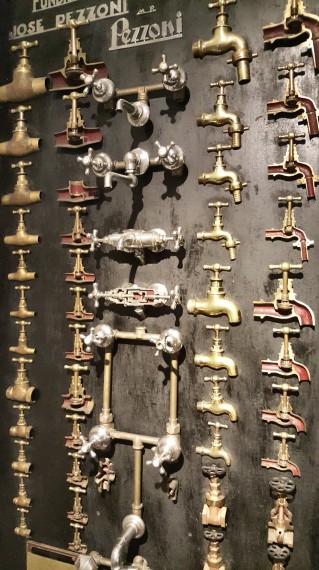 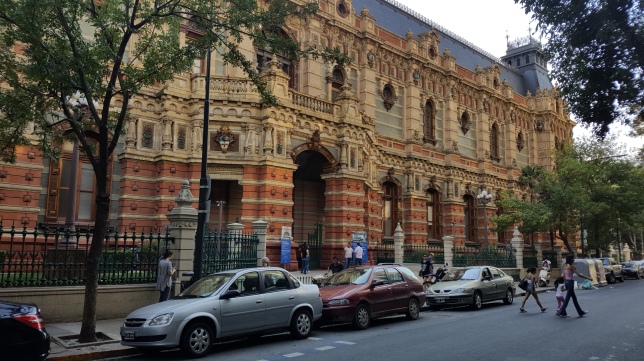 Today was much more interesting than it sounds!

Day 139 (12thApril)
We were up early today as we had to be at Ezeize Airport to meet our shipping agents, Javier and Sandra, who are assisting us with transporting the bike back to the UK. First, we sorted out the documentation (bike registration document, temporary import permit and passport) and then removed the bike’s windscreen, mirrors and rear luggage (top) box. We’d already removed all of our non-bike related gear and flammable liquids such as WD40. We then emptied the petrol tank and jerrycan. Shipping costs depended on the size of the crate, so we made the dimensions as small as possible. 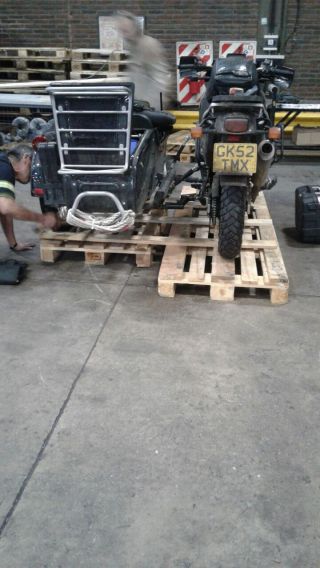 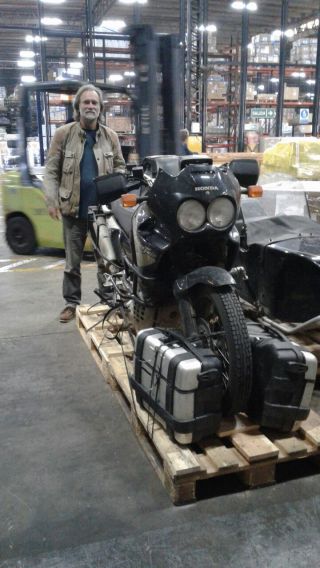 Mark then rode the bike to the customs warehouse where Sandra began the formalities to get clearance for the bike to depart. I had to wait in a nearby café with Javier as the warehouse area had restricted admittance. By mid-afternoon the bike was cleared and ready for transit. We said our goodbyes to Javier and Sandra, and caught a minibus shuttle back to the centre of Buenos Aires, in a somewhat sombre mood as now the bike was crated and it truly felt like we’d come to the end of our journey.
Tomorrow we have to go to a freight office in the centre of the city to pay for the transportation costs.
We heard today that HMS Protector, an English ice patrol ship, had docked in the harbour. Apparently, the English and Argentine Governments have been involved in joint research in the Antarctic and the ship’s visit is an illustration of improved bi-lateral relations between the two countries. This vessel was also one of the first to assist in the search for the Argentine submarine ARA San Juan, which went missing last year. We will try and have a look at it if time allows.
Day 140 (13th April)
We walked to the Navicon office in the Lavalle area of the city and paid for the bike’s shipping. We were pleased to see Javier and Sandra again, who were there on business. Our paths may cross again if we manage to get to the Horizons Unlimited travellers’ weekend in May, back in the UK, which they are attending during a 6-week visit to England, Wales and Scotland.
Lavelle is very good for shopping and has similarities to London, so we had a good look around the shops and I purchased my first item of clothing in five months!
We had lunch in a nice traditional restaurant, El Globo, which had a very good set menu, so we spent a while sitting there enjoying the atmosphere and the attractive interior. 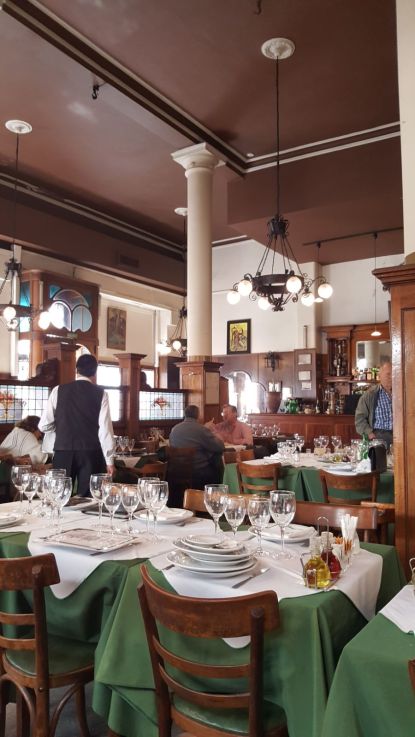 The rest of the afternoon was spent admiring the old buildings in the area and making the most of being outside in the sunshine.  On our way back to our hotel there’s a Yamaha motorbike shop we had a look in.  Imported bikes attract a huge tax tariff….this 1200cc Yamaha was for sale at US$33,200 (£23,310) whilst in the U.K. one can be bought new for a little over £10,000.  Smaller bikes, however, are made in South America under license and, with far less tax, are considerably cheaper. 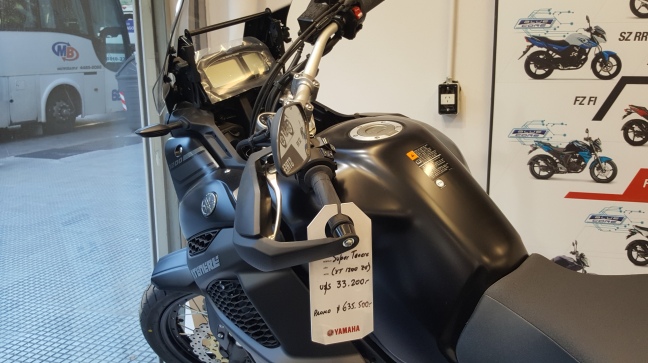 Day 141 (14th April)
We’ve been so lucky with the weather this week as we again woke up to a bright sunny day…. but sadly our last day here in Buenos Aires before we fly home tomorrow morning.
We walked to Plaza Francia in Recoletta, to a large Artisanal market. There were a few buskers playing tango music, and we spent several enjoyable hours wandering through the stalls and then having lunch outside, in a café we discovered a few days ago.
On the way back we bought a bottle of champagne to celebrate the end of one fantastic journey and to the next, wherever that may be.